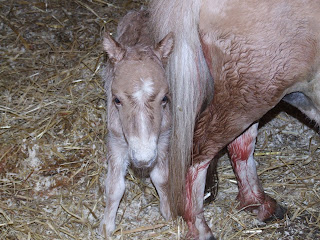 Look what we found last night just before we were going to bed. We missed the actual birth by minutes as the Foal was still soaking wet, we think he was born at approx 11.30 - 11.45pm.
The first three pictures were taken last night, the rest I took early this morning. If you click on them, they should pop up bigger.
He seems full of Beans this morning and has been bouncing around the stable, like a little lamb!
He has the most beautiful colouring, Cream Dun with a darker Dorsal stripe.
You can only imagine the relief to have another live Foal. I've been having a cuddle this morning. He's gorgeous.
I think the Boys want to call him Demetrius, which means lover of the earth, given to the Earth goddess Demeter.
He's out in the field with his Mum Lemoney, at the moment, meeting his new play mate Dioynsus and soaking up the Sunshine. Ben's just gone up there with the Camera, so I'm looking forward to seeing what pictures he's able to get.. 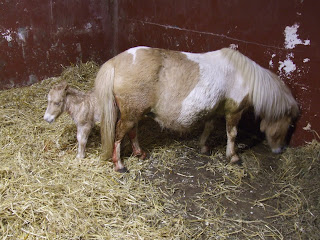 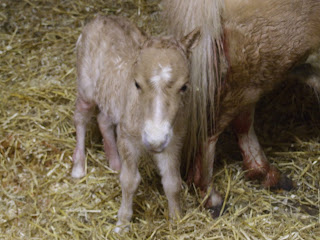 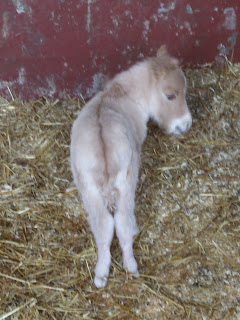 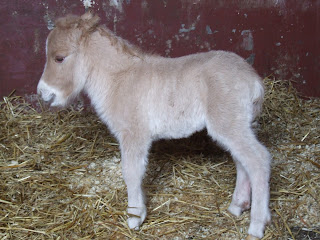 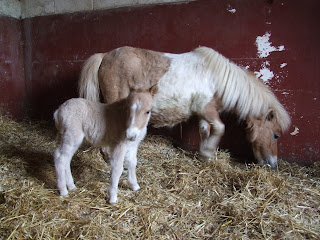 Better Then An Easter Egg.. 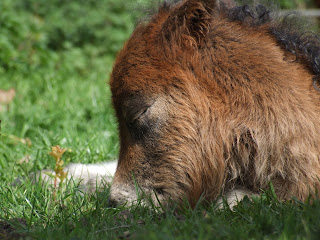 This morning I took an early morning stroll down to the Stables and look what I found. Far better then an Easter Egg.
Chrizzy had not long given birth to a beautiful Colt Foal. His Sire is Birchwood Viscount. He is a strong little thing and has been jumping around like a Spring Lamb.
He went out in the little Paddock with his Mum for a few hours in the Sunshine, but we've got them in now as its really hot.
This little one has been named and will be called Dionysus, who was the great Olympian god of wine, vegetation, pleasure and festivity.
Thank you to everyone, that left such lovely comments on my Facebook and on the previous post. xxxxx 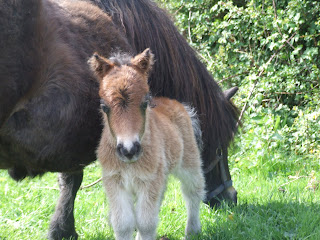 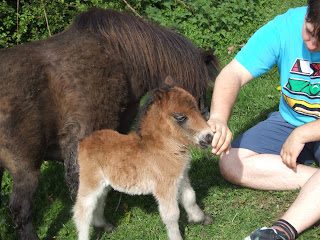 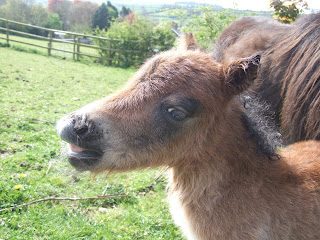 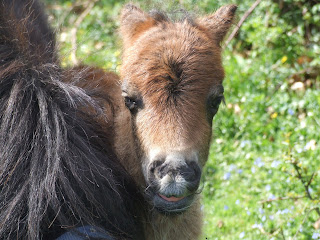 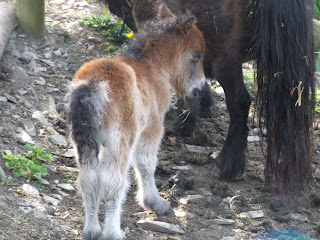 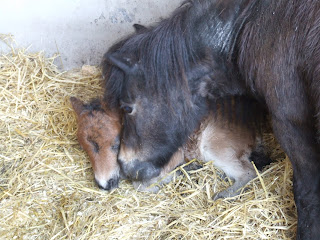 Not A Good Friday.

Hi everyone this is Ben, writing this blog post for Mum.
Mum was worried that the baby wasn't feeding very well last night, so milked the Mum and gave it to the foal. This morning Mum was down the Stables really early and the Foal seemed really cold. Mum put a chair in the Barn and Dad and Mum took it in turns, to sit with the Foal on their laps to warm it up. She rang the emergency Vet, who advised warming the foal as we were doing and rubbing some Honey on its gums to stimulate the sucking reflex. Which we did. Mum also milked Tinkerbell to keep the milk flowing and to keep it in the fridge.
Mum gave me the Foal to hold while she popped indoors and the Foal started labouring. By the time Mum got back to me, the Foal had died in my arms.
Mum is distraught and won't be around for a while. As you can imagine she is now totally stressed out and desperately worried about the other Mums. Especially as we have already lost Lil and her Foal. Its all been very traumatic as Mum Loves her Ponies very much.
I just wanted to let you all know on Mum's behalf.
Ben
Posted by Debbie at 11:42 47 comments: 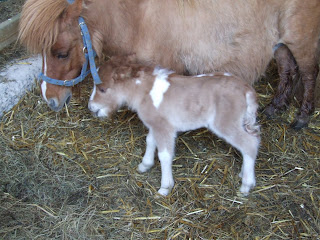 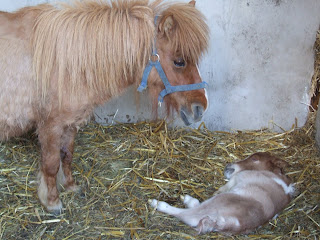 Last night as we went to get the Mum's to be in for the night. Harry shouted down the field, that Tinkerbell was in Labour. The bag appeared as he got to her. Then one foot appeared, but not the other. I tried to feel where 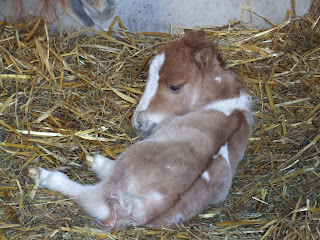 , the other leg was, but couldn't find it. Panic set in, as I was terrified that we were going to lose another Foal and Mare. I rang the Vet and Angus was here within minutes. He immediately gelled up and found the other leg, which he brought forward. He then attached some rope to the foals legs and a winch and assisted Tinkerbell with the birth. I can honestly say what sheer relief it was, as I saw the foal was breathing. Angus gave Tinks a shot of pain killers and another of Antibiotics, as it had been quite traumatic for her. It's her first Foal.
Debie and the Poppets are staying with us at the moment and watched this Saga going on. Although Debie did take the little man indoors, until I knew that the Foal was alive. Debie, has got all the new born pictures on her Camera, which Megan and Beth took so can't share them with you at the moment.
Once Tinkerbell had settled down a bit, we moved her and her baby into the Barn so that we could keep an eye on them.
These Pictures were taken this morning. Tinks and her baby are doing really well. Baby is feeding well and Tinks has really bonded with her. The Filly Foal (Girl), has yet to be named. We use the Gods and Goddesses names, and this year we are on the letter "D". We were debating up till Midnight last night what to call her, but we are still undecided. I'm sure she will have a name by the end of today. It looks like we could have another arrival or two by the end of the week. So everyone, please keep your finger's crossed for safe arrivals..

In other news my Computer is still poorly, so Ben has let me upload this via his laptop. I need to get an external hard drive, to get all my pictures and documents off of my computer, before Tux can mess about with the hard drive, in case we lose everything. It's a total nightmare...
Posted by Debbie at 14:07 23 comments:

Oh Woe Is My PC 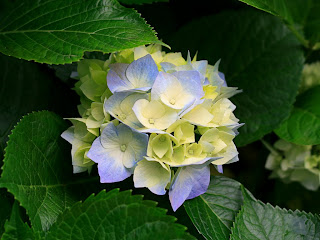 In case you've been wondering where I am. My poor PC is poorly and is away at Ben's friends being fixed.
It seemed everything went wrong all at once, first the loss of the foal, then Lil, then the PC. They say it comes in three's, so hopefully, we've had our share now.
Ben's friend Tux, is a computer whiz, so I know its in good hands and his payment for fixing it??? Cakes!!! He thinks I make exceeding good ones, so this weekend I'll be baking him Butterfly Cakes..LOL
Ben has let me borrow his laptop, while he is home from Uni for the Easter Holidays.
I've been totally lost without my computer. I was terrified, that I was going to lose all my pictures and documents stored on there. So I am going to invest in, an external hard drive to back them all up. As I can't afford a new computer, and dreading the arrival of the Vet's bill. I don't think any of us realise, just how much we rely on all this technology, what did we do before the World Wide Web????...
Hopefully, my computer will be back here, sometime this weekend or early next week. So if you've emailed me and I haven't answered I apologise, you now know the reason why.
Next week Debie and the Poppets are coming to stay. Debie, has treated herself to a new camera, so I'm looking forward to having a play around with that. Yes, its me that thinks her pictures are pants! LOL...Yes I can say that, cause I'm her mate, well I was...!!! Having seen Debie's sculpts in the Flesh, so to speak, I have to say her photography skills, do them absolutely no justice at all. I've asked her to bring the new sculpts with her, so that I can take some pictures of them.
Hoping to be back on line soon and back in the blogosphere catching up with every one's blogs. Until then have fun and I'll hopefully see you all soon...xxxx
Posted by Debbie at 10:39 12 comments: 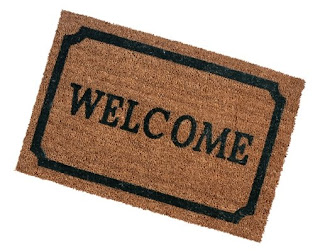 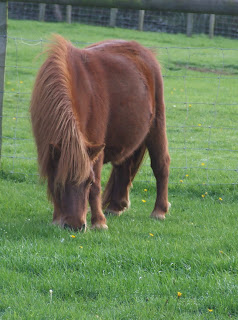 Unfortunately our lovely Lil lost her battle yesterday.
Its been a very traumatic week for us all. Lil's gave birth on the early hours of Tuesday Morning and we found the Foal dead. Lil then became extremely ill and we have had the Vet here every day.
Her body just went into Toxic Shock, we tried everything to help her including intravenous antibiotics, pain killers, syringing Electro Light Solution into her and giving her injections of Penicillin. But by yesterday afternoon, I could see that she was in distress. So called the Vet out again and we agreed to let her go peacefully.
Thank you to everyone that sent messages of support this week, especially all my friends & family on facebook. We all really appreciated your kindness.
Lil will be greatly missed, as she was one of the most sweetest Pony's and we Loved her dearly..
Run Free Lil with your Baby.....


By the edge of a woods, at the foot of a hill,
is a lush, green meadow where time stands still.
Where the friends of man and woman do run,
when their time on earth is over and done.


For here, between this world and the next,
is a place where beloved creatures find rest.
On this golden land, they wait and they play,
til The Rainbow Bridge they cross over one day.


No more do they suffer, in pain or in sadness,
for here they are whole, their lives filled with gladness.
Their limbs are restored, their health renewed.
Their bodies have healed with strength imbued.


They trot through the grass without even a care,
til one day they whinny and sniff at the air.
All ears prick forward, eyes sharp and alert.
Then all of a sudden, one breaks from the herd.


For just at that second, there's no room for remorse.
As they see each other...one person...one horse.
So they run to each other, these friends from long past
The time of their parting is over at last.


The sadness they felt while they were apart
has turned to joy once more in each heart.
They nuzzle with a love that will last forever.
And then, side-by-side, they cross over...together. 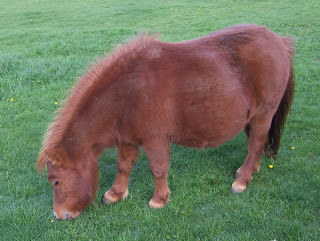 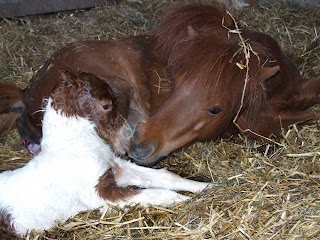 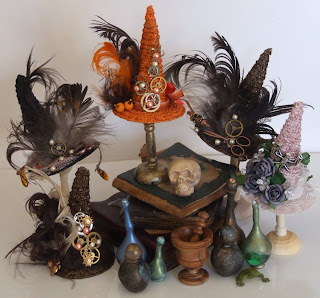 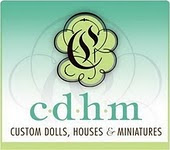 The latest I-Mag from CDHM, is now available on line.
If you go to the Spooky section you might see some people that you recognise and also the person that wrote the piece. Enjoy there are some great articles in there.

On a personnel note, I haven't been around much as I have a lot going on at home at the moment. We also have a very sick Pony, who is critically ill and is taking nearly all of my time. Thank you everyone, that has been sending positive thoughts and prayers for her. I really appreciate it. xxxx
I'm sorry if you've emailed me and I haven't answered, but once I have a bit more time I will get back to you and update my blog..
Posted by Debbie at 11:01 5 comments: 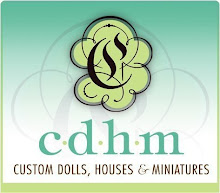 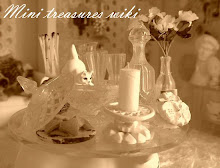